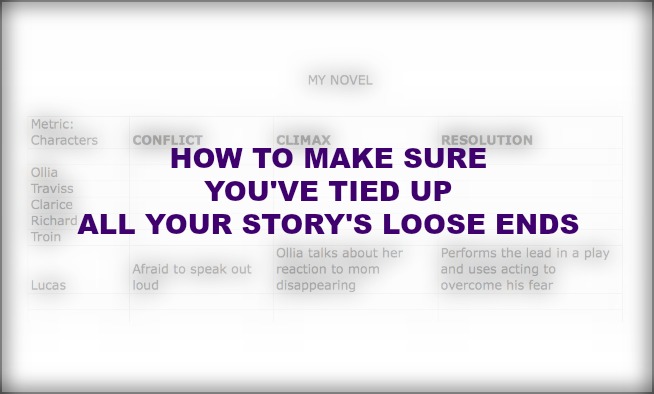 You don’t have to be Type A to write a novel, but it’s definitely an advantage if you happen to be. There are some parts of writing a book, like tying up all the loose ends you’ve left in your plot by accident, that take a little, slightly obsessive organization.

Yes. The series of steps I’m about to show you involves making a chart. IT IS NOT AS SCARY AS YOU THINK.

There is a smart, simple way to make sure you’ve carried out all your sub-plots from beginning to end without leaving any behind. That’s what I’m going to show you today, because I like charts, and this is how I stay sane.

We’ll use part of my story as an example throughout. I reveal a bit of a spoiler here, but it doesn’t give much of the main plot away, so it’s not the end of the world. I don’t expect the book to ever get to the publishing stage (realistically) so if you’re from the future and you’re mad at me about leaking a spoiler, deal with it.

Step 1: On a sheet of paper, make a chart with three columns

You can use Excel or a table in Word or Google Docs too, if you’re not a pen and paper person. Here is how I set up my table (and in case you were wondering, I actually do use this method for all of my stories and it works. I don’t usually do it until I’m a few weeks away from finishing, because it’s very addictive once you start).

Your three columns should be some variation of what I have listed above. Give yourself a column for the conflict, the climax of that particular conflict and its resolution (how you’re going to tie it together).

But before you can list these out, you need a metric—a way you’re going to separate your sub-plots.

Step 2: Choose your metrics and add them to your chart in rows

Which metrics you choose will depend on your story specifically. If your story focuses a lot on different locations, like a sci-fi or fantasy story probably might, you might want to use location as your metric depending on which part of the story corresponds with each location. You could also separate each conflict depending on the character who interacts with it the most.

I have a lot of characters, so I’ve listed out the primary ones. Character development is a big part of my story mainly because it’s a prequel to a five-part novel sequence. My main goal is to introduce the characters that will play major roles later on in the sequence and show the reader where it all started.

Each character has his or own conflict. And throughout the story, as a result of the different events that occur throughout, each character eventually gets to a resolution. Or they should, if I weave pieces of the story together the right way.

Step 3: Write down every conflict, climax and resolution

Each metric should have a resolution. This is your key to making sure every minor conflict you introduce throughout your story is tied up and secure before you finish. The last thing you want is to leave a plot point just hanging there. It’s much easier, if you have some time, to fix it now than it might be to try and go back and do it later (a strategy, mind you, not applicable during a WriMo). 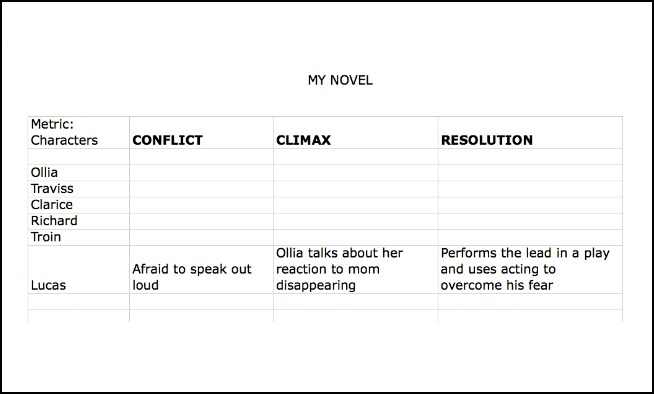 This does not mean all mysteries or overarching conflicts need to be solved, especially if your story is part of a larger overarching story and not everything can be resolved in just one story. In my story, Lucas’s conflict is part of this book’s specific plot. It doesn’t carry over into later books, not really (not that I know of right now). There is another character that I know of, however, whose minor conflict does not get fully resolved. But it does come to … well, an end.

Let me know if these steps help you out at all. Give it a try next time you’re a little hesitant about whether or not you’ve tied everything together sufficiently. If you have a different method that works for you—tell us about it!