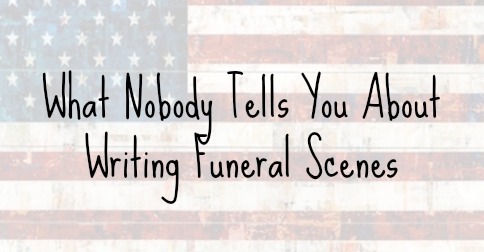 Nobody likes writing about funerals.

So why do we still write them?

Today I’m thinking about my grandpa, and my best friend’s grandpa, and a handful of other people’s wakes and funerals I’ve found myself wading through over the past decade or so.

Holidays are good days to reflect. I’m not sad, really. Remembering kind of feels like sadness, but less empty than that. I guess.

As most of us have figured out by now, it’s the bad experiences, the sad ones, the hard-to-talk-about ones, which often inspire the most heartfelt prose. Technically I’m one of those “lucky” people who didn’t have to deal with death firsthand all that often, at least not when I was young.

Except, it definitely didn’t feel so lucky when I did have to for the first time.

Today I’m thinking about my grandpa, and my best friend’s grandpa … people who mattered to me and people I got to say goodbye to in the most beautiful way. I’m also thinking about other people I’ve lost in the most permanent, devastating way, whose wakes and funerals I didn’t get to go to, whose absences still don’t feel real to me because I was never forced to let them go.

I don’t write about death a lot. But the deeper I dive into my journey as an aspiring writer, the more I realize writing about death is inescapable. Death is a part of life. We have to learn to deal with losing people. And once we lose them, they don’t come back. I used to think people who wrote about death all the time were just too depressing. Over the past few years I’ve come to realize their stories aren’t sad. They’re just honest.

About a year ago I was sitting at my kitchen table, writing a funeral scene. Technically a military funeral, but at that point I’d never been to one before. I remember that day because I sat there, writing that scene, crying because it was the first time since starting my book I’d ever felt connected to my characters on a deep, emotional level.

I’d already lost someone I really cared about earlier that year, one of those someones whose funeral I didn’t get to attend. I was thinking about death and how much I hated the idea of being close to someone who had died—something that, at that point, really hadn’t happened to me yet. We were also about to lose my grandpa then. I think part of trying to write that scene then was me trying to prepare myself for the real thing.

I never finished writing the scene, though. I couldn’t, because I didn’t know how to get through it. I worried I hadn’t started it right. The middle was too vague. I had no clue how to end it.

We lost him. It was one of those pieces of news that latched on slowly and started pulling me under even slower. I tried to go for a run that morning, made it about a mile and after that couldn’t make my legs go forward anymore. I didn’t touch my book again for a week. Even after the funeral. Even after I finally knew what it felt like to be there, to see it all unfolding, to feel all sorts of mad and sad and relieved all at the same time.

I just couldn’t then. Sometimes, you just can’t.

There will be two funeral scenes in the latest version of my book, neither of which I’ve written yet. One, my main character looks at from the outside, because it’s for someone she didn’t know well, a type of ceremony she doesn’t understand because it’s literally foreign to her. The second, she won’t be able to describe very well, because it’s for someone she loved. And it’s hard to describe feeling all sorts of mad and sad and relieved and empty all at the same time.

Up till now I haven’t tried rewriting that first funeral scene. It’s not pleasant, or enjoyable. It’s the one part of writing I don’t enjoy. What nobody tells you about writing funeral scenes is that it hurts, and no matter how hard you try, you’ll always think of that one person you never got to say goodbye to, the whole time you’re writing.

What nobody tells you is: it’s okay to think about them. It’s okay that they are still part of you.

I think I’m ready to write them now, though, these funeral scenes. Because today I’m reminded it’s okay to miss someone and remember them without that numbness you feel when you first hear someone tell you they’re gone. It’s not sadness. I think our hearts get full of memories, and we keep them there so long they start begging to be set free.

Memories don’t belong inside. They’re meant to be opened, and exposed and retold.

I think if we’re brave, and we sit down and we write about those people we miss and who aren’t here anymore, we’re not just letting them go. We’re letting them live on. We’re taking our grief and turning it into something real; something final; something to be remembered.

Those people we knew, those we loved, and still love, we’re taking our memories of them, the memories we’ve kept locked away, and we’re sharing them with anyone who happens to read what we have to say about them. That’s what happens when we write about them. They become something tangible. Their stories won’t ever be forgotten. They become part of our story. Forever.

Being brave, opening up, looking back on those memories that hurt and pouring them out onto a blank page, that’s what they would have wanted us to do. They can’t do it themselves. Even though they’re gone, they still need us.

Nobody likes writing about funerals. But I think, at some point, we all have to do it, to remind ourselves words can hurt … but they also have the remarkable power to heal.

A recent graduate with a B.A. in English and a completed major in nutrition, currently seeking a graduate degree in health communication, Meg is a twenty-something workaholic with a passion for writing, coffee and dietetics. In addition to her status as an aspiring novelist and Grammar Nazi (and the mastermind behind this site), Meg is an editor for College Lifestyles magazine and a guest blogger for Food & Nutrition Magazine’s Stone Soup.  She is a seven-time NaNoWriMo winner and has written several creative pieces for Teen Ink magazine. Follow Meg on Twitter.

3 thoughts on “What Nobody Tells You About Writing Funeral Scenes”