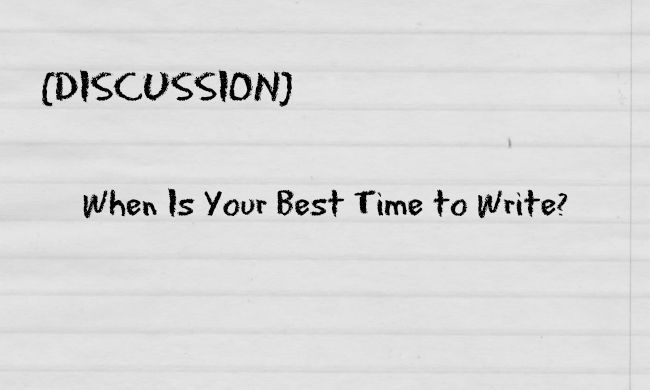 I used to be able to wake up early, before I turned 23. It’s like a switch flipped somewhere, and now I’ve become one of those people who would rather throw an alarm across the room and sleep until the last possible second than wake up before the sun does.

Okay, yes, I know it has nothing to do with age. I’m just caught in that really stupid place between graduating college and settling into a steady full-time work week. I’d love to say writing is always my priority, but let’s be real: it can’t be, if I want to be a good grad student and run a successful magazine and work my way up to running a half marathon. Among other adult-y things (laundry, cleaning out my Keurig, you know, the fun stuff).

So since my routine has been a little shaken up over the past four months, never really constant, it’s been pretty rough finding the best time to meet my daily word count. I write daily because I really want to finish my book soon (I’m very close, interpret that how you will) and I’m afraid I’ll lose momentum if I miss too many days in a row. So of course I don’t miss any, which is good for my book, awful for my sanity.

Anyway, as I was saying earlier, I used to be able to wake up early (I don’t just come up with these random leads for nothing, you know) and that was when I loved to write the most. Now when I say early, I actually mean early—like, before sunrise. Yes, that time of day does exist.

You can get a lot of writing done at four in the morning, especially when you don’t live alone, because even opening a drawer or shuffling around in a closet might wake someone else up, and if you don’t like being woken up, imagine being on the other end of it (oops). There isn’t much else to do, other than tuck yourself in a corner and write a lot.

So that was my best time to write. I used to wake up on weekday mornings, make coffee and write until I had to start getting ready for work. I’d write blog posts in the evenings, occasionally, and then I’d study and edit articles and it was a great routine. I was just starting to get used to it, except I had a temp job, and as you can probably guess, that ending threw off everything else, including my writing.

Now my routine, after shifting around a lot this summer depending on my class schedule and whatever was happening over at CL, might be changing again (fingers crossed). So I’ve been thinking a lot this week not about how I’m going to squeeze writing time in—I always do, writing is kind of like my version of breathing—but when I’m going to fit it in.

Do I still love to write in the mornings? I really do, actually. But I also need to run first thing in the morning or it won’t happen at all. And the later I sleep, the longer it takes me to wake up and get going, so very rarely do I write before I run. And by the time I get back from running, I usually have a solid idea for a blog post, which I usually try to get up before lunch (some days it’s a struggle, as you’ve probably noticed lately).

More and more I find myself writing in the afternoons and evenings, and I kind of like it. I completely ended my day with writing earlier this week and it was amazing … until I couldn’t fall asleep because I kept thinking about my book (of course) and how I wanted to keep writing (but sleeeeep).

So I’m going to keep shifting things around and seeing if I have a “best” time to write. When am I most focused? When do I put out my best content? If there’s even a time of day either of those things happen better than other times.

I’m curious as to whether any of you have found your best writing times. Sundays are becoming discussion days here at Novelty Revisions, because I do want us to become a little more community-focused and I want this to be a place not only to come for advice, but for you to share your thoughts and give others advice and talk about writing.

Do you have a specific time of day you’re most productive, writing-wise? How did you figure it out? What do you do when the usual time you spend writing gets filled up with something else?

I’d love to read your thoughts! Compose your words of wisdom! I look forward to discussing with you today.

Meg is a twenty-something workaholic with a passion for writing, coffee and health. In addition to her status as an aspiring novelist and Grammar Nazi, Meg is the managing editor at College Lifestyles magazine and a guest blogger for Food & Nutrition Magazine.  She is a seven-time NaNoWriMo winner and has written several creative pieces for Teen Ink. Follow Meg on Twitter.

6 thoughts on “[DISCUSSION] When Is Your Best Time to Write?”