It’s kind of addicting, so be careful. 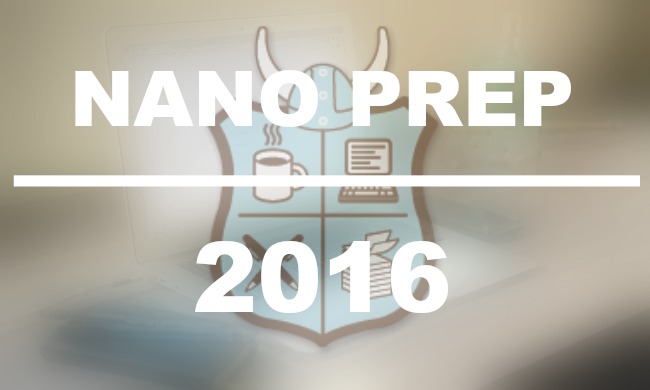 Knowing your characters before you introduce them to potential readers is a time-consuming task. But when you only have so much time to write 1,667 words 30 days in a row, knowing who you’re dealing with before you start becomes extremely important. While you have the time, I would suggest “sketching” at least one of your characters. Not drawing, though I suppose you could do that too. Think of a character sketch as a bulleted list of all the facts you eventually want your reader to know about them.

There are plenty of examples out there from creative writing websites that suggest you outline every aspect of your character in detail, everything from appearance to mannerisms to things they experienced in their childhood. If you want to go into that much detail, you’re welcome to do so. But if you’re short on time and want a simpler, more focused approach to character sketching before November 1 hits, this short guide is for you.

I divide my character sketches into three “levels” – basic details, relationships and history. I find that small physical details like hair/eye color either come as I write or I add them in later. You can add a category for physical details if you want to, though; that one is fairly self-explanatory.

Everything from name/nickname to jobs, hobbies, daily habits, likes, dislikes. We’ll use one of my main characters (MCs) for next month’s novel as an example here. The book opens, after the prologue, with [character’s name – no, I haven’t decided yet, I hate naming things] sitting in a chair, her feet up on a desk, staring at her name printed at the top of a resume. Everything about this scene conveys things she does not normally do, and is not supposed to do – feet up on her boss’s desk, glancing at his files when he’s not there. We don’t know anything about [name] at this point, except:

I like to list details as bullet points because traditional outlining gives me unwanted flashbacks to my freshman college composition course, but that’s just me.

Relationships – connecting one character to other characters you might also sketch

Here you might want to create a sort of diagram that connects characters to one another. For the sake of time, I’ll use simple bullet points again. What’s important is that you specify who the person is, how they are related to your character, your character’s feelings toward that person, where the relationship stands at the start of the novel.

I typically do this for every major character I plan on featuring in a story. I get a little character-happy and always have too many, so I’ll spare you more details.

History – things the reader learns as the novel progresses

Every character has a past. Whether it’s largely significant in the novel or just a small detail, I think it’s best you know as much about what your character has been through as you can. Start from the beginning. Where do they come from. Does their relationship with their parents (or lack thereof) matter to the story? Past relationships that aren’t with other present characters in the novel? Figure out how your character’s past has gotten them to where they are when the novel begins and how it will shape their development actively throughout the novel.

Again, these categories are based on the general themes and story elements I personally tend to focus on in my fiction. Yours might be different. You might add more details like significant locations your character likes to visit or actively avoids. My philosophy is that as much of it should relate to the story as possible. Even if you do come up with more details than you end up using, what you don’t use can serve as inspiration for things you add later.

Some argue that outlining before you start writing a novel kills spontaneity. No one’s saying you have to outline every scene, every piece of dialogue. Getting to know your characters before you spend a month or more with them, though, will significantly increase your chances of hitting 50K this year. I can guarantee it.

I’m really excited for November now. Unless I can’t come up with names for my characters, which will be a bit confusing.