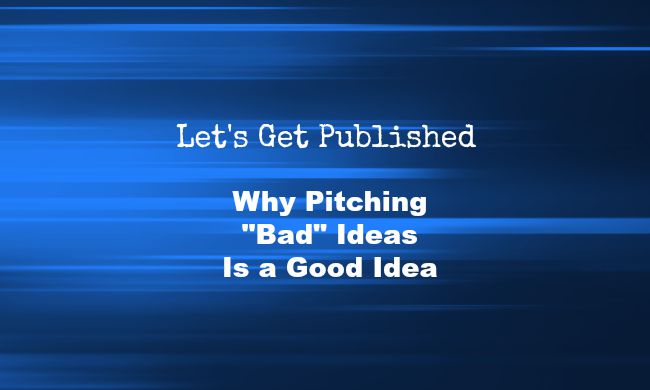 Before you scroll down to the comments section to scold us for our latest bite of advice, take a deep breath. Never judge a blog post by its title, right?

So far in our LET’S GET PUBLISHED series, we’ve covered how to choose the right publication to submit your pitches to and how (and why) to keep track of the pitches you do submit. Never once have we advised you to submit a story idea, to anyone, before giving it some serious thought first.

So why, then, are we screaming at you to pitch “bad” ideas? What’s that about, huh?

The thing is, nothing you submit is ever going to be perfect the first time around. Either it’s just not refined enough to make it past the first publication barrier or it doesn’t quite fit the mold of what that particular editor is looking for.

But sometimes, you have a pitch you’ve been brainstorming and fixing up for a little while. You know it’s not perfect. Keeping it to yourself just because you don’t think it’s ready, though, is only going to hurt you. Here’s why.

You are your absolute worst critic

Have you ever noticed that it’s the ideas you think need the most work that other people grab onto the fastest? It’s always the idea you don’t think will make it to the next round that gets picked up first. There’s a reason for this: you spend a lot of time with your ideas, and after awhile, none of them are ever going to seem appealing enough to you to sell.

When we spend enough time mulling over our story ideas, we become desensitized to them. Have you ever just casually said to someone, “Oh, I’m writing a book/article/story” and wondered why they seem so intrigued? Is it really that big of a deal? It is! You’re just so used to it, it doesn’t look that way to you anymore. We face the same dilemma when pitching ideas. So when you don’t think something is quite good enough—pitch it anyway. Just do it.

You might get more helpful feedback than you expect

It’s not always easy to predict how editors are going to react to your idea submissions. Some, okay, most, will pick the ones they like and spend their time pursuing those: they’ll just ignore the ones they aren’t planning on using, because they get hundreds, and they’re not robots. They can only do so much.

Some editors, though, particularly with small publications and newer blogs, will respond to your pitches even if they’re not quite ready to move forward in the publication process. You might actually get some decent feedback on how to revise your pitch to make it stand out more, broaden its subject matter or clarify its purpose. You never know, so it’s worth taking a chance regardless of whether you’re completely confident or not. Which, of course, leads nicely into our final reason to pitch, even when you think you have a “bad” idea.

You never know until you pitch

Honestly, if you never just “go for it,” you’re never going to get published, anywhere, no matter how much time you spend refining your skills. Pitching to publications is an experience in itself, so even if it feels like no one is ever interested in the ideas you’re throwing out there, it’s so much better than never pitching at all.

As we mentioned above, sometimes what you think will never make it will end up doing exactly that. The more time you spend worrying about whether so-and-so will “like it,” the less time you’re spending getting it out there for people to see, working on other projects and getting better and better at pitching, writing and selling as you go.

Have a bad idea? Pitch it. At least now you know what we mean by “bad.”

You can do it. The moment just before you hit send is the worst. Okay, waiting to hear back is pretty awful, too. But that gets easier to handle, too. We promise.