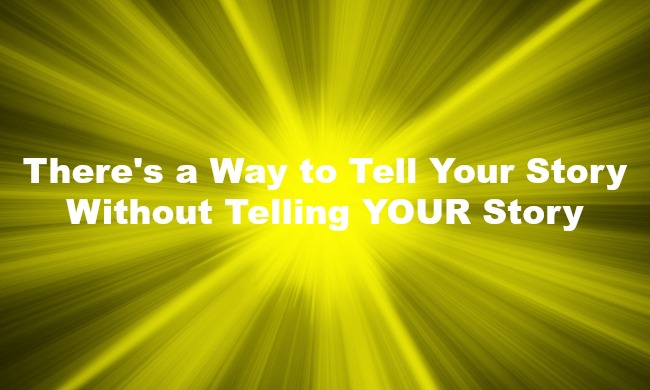 Everyone has a story. I’ll talk more about that this Friday when I post my Project for Awesome video (bet you can’t guess who I’m promoting!). The trouble is, everyone wants to tell THEIR story. This is what happened to me, this is how I dealt with it, this is what I learned.

Me me me. Which is fine if you’re someone who’s done a lot of notable things and people are actually interested in hearing how you got to where you are now.

But let’s be honest. Most of us aren’t anywhere near there. We might have really great stories. But in reality … no one really cares enough about us to listen to them. No one outside our family and close friend circles, anyway.

Of course we can still share them, and most of us do. I did in my essays for Teen Ink way back in the day. Sometimes you just have to get it out there for personal reasons. You’re trying to get past something or make something useful out of something you’ve been through recently.

Or you have something important to say. A message you want the rest of the world to hear.

Which is the case for many of us, and the reason why it can be so frustrating when it seems like no one is listening to us. Or disappointing, when we work so hard writing about ourselves, for the most selfless reasons, and no one reads it.

It took me a long time to find a solution to this problem. But, almost a decade later (eeeeeek) I’ve found it.

My first ‘fiction’ book, or what I count as a first real attempt at a full-length novel, was strictly autobiographical, but I tried to play it off as otherwise. I changed all the names and made up some of the key events. But it was all about me. All the characters were my friends in character form. I didn’t change very much. Which actually would have ended up being really embarrassing for me if I’d let very many people read the proof copy.

I still have it. It’s sitting right next to me, actually (it makes a cameo appearance in Friday’s video!). It was a nice first attempt. It was a story I, at that time, really needed to tell. But I’ve never written a book based off my life since then. And there’s a pretty good reason why.

Still, things happen to us – great things, awful things, in-between things. We usually learn pretty valuable lessons from these kinds of events, and as writers, it’s really hard not to immediately consider turning what we’ve been through into a full-length novel of sorts.

That usually doesn’t work out so well when you’re trying to get a book published, though. From a business perspective, your life story isn’t all that interesting.

However, the things that have happened to you, the lessons you’ve learned, are.

The key to telling your story isn’t telling your personal story. It’s taking the key pieces of your life, extracting the most important themes and morals from those events, and building a story, a fictional character’s story, from those elements.

Doing that, it’s not about you anymore. Not directly. And somehow, probably much better explained by science, that makes the story much more relatable to its audience.

When it remains mostly fictional, it’s easier for the reader to focus more on the theme than on the person whose life a story is based off of.

This is just my opinion, of course. I’ve read a few published autobiographical accounts written by people I’ve never heard of before, and they’re never really that interesting. A memoir written by or about someone you really admire and already know a lot about, that’s one thing. But to be honest, if you’re nobody (yet), it’s just not an effective storytelling strategy.

You can still tell your story. But do it in a way that makes it a lot less about you, and a lot more about the story itself.

Does that even make sense? I’ve been pulling super late nights trying to get this video ready and I’ve only had one cup of coffee at the time I’m writing this.

Get excited. I mean it.